Several years ago I bought a small asparagus fern from a local garden center. At its size, the plant was really more appropriate for tucking into a larger container garden than growing in a stand-alone pot, but I liked the way it looked (and the price was right) and so it came home with me.  I put the pot in a north-facing alcove behind the garage with several other plants.  The plant grew well, and the critters didn't eat on it.  At the end of the season I brought it inside, where the lack of sun caused it to shed yellowed leaves like crazy, but it survived until I put it outside again in the spring.

Fast forward a couple of years.  We had roller coaster weather this fall, with the low temperatures almost reaching the danger zone a couple of times before I actually brought the plants inside.  When I picked up the asparagus fern the pot was as hard as a rock, and I suspected it was full of roots.  I wasn't inclined to do anything about it until spring, though.  The plant went in it's normal place in the master bathroom.

A couple of weeks afterwards I noticed a shoot sticking up from the top of the plant.  That shoot grew and grew, and it was followed by a couple of more shoots.  It's never done that before, so I wonder if after being outside in the chill the warmer temperatures inside the house tricked the plant into thinking it was spring.  This is what it looks like today: 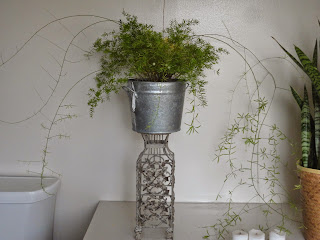 As much as I admire the plant's tenacity I'll need to trim the shoots soon.  When I sat down on the toilet the other day I got hit in the face by one of the long sprigs.