Roasting In The Range 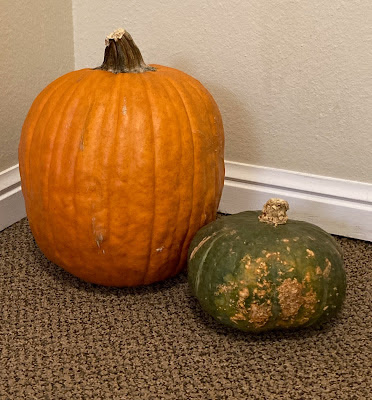 Now that the holiday is over, it's time to process those squash. Today I tackled the smaller kabocha (Japanese pumpkin). Partly because it was smaller and would take less time, and partly because yesterday I finished off the previous one.

I prepare a kabocha every couple of weeks, and have it down to a system.

What do I do with the seeds? I'm glad you asked. Years ago when my boys were young they always wanted to roast the seeds of pumpkins. I was always underwhelmed at the results. Then I learned that if you simmer the seeds in salt water before baking, the saline taste permeates both the shell and the interior kernal. I follow the boiling and baking process from Bob's Red Mill, except I don't add any oil or additional seasoning to the seeds before baking them.

Sometimes when I cut open a pumpkin or squash the seeds are flat and limp, but today they were full and firm. I knew I would enjoy eating them when they were well-roasted. The procedure: 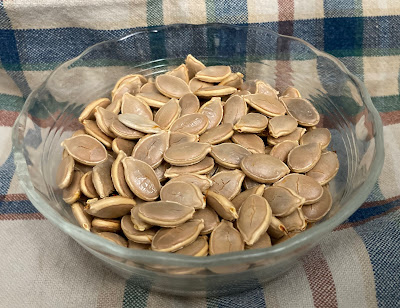 In the end I ended up with a cup of roasted seeds. Most of them made it to a plastic container with a tight-fitting lid to be eaten over the next few days.