Coming To A Mall Near You (Maybe)

I think that just about everyone knows that malls aren't what they used to be. West County Center, the mall within walking distance from our house, has multiple empty storefronts and a couple of unused food court spaces.

The mall's parent company, CBL Properties (which owns 45 malls throughout the country, including West County Center and three other locations in the metropolitan St. Louis area) seems to be trying out some creative solutions to get people to come in. The latest is to convert one of the vacant food court stands into a pop-up eatery. The concept opened this week with Yogi Donuts, which normally fries its mini-donuts to order from a food truck. You can get a 6, 9, or 13-pack of freshly prepared donuts-plain, tossed in cinnamon or powdered sugar, or drizzled with one of several sauces (some of which include sprinkles).

Of course we had to try some. Hubby Tony got his with cinnamon sugar. I chose chocolate sauce and sprinkles. 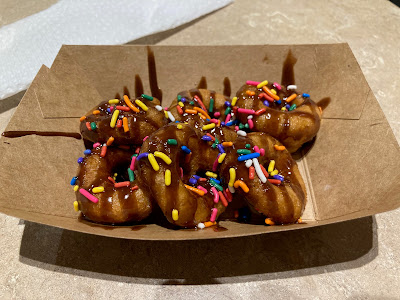 If the pop-up eatery concept is successful it may be expanded to other malls. I wonder what will be at this one next?