Last night Hubby Tony and I decided to go downtown for a Blues at the Arch concert. Because there was also a baseball game scheduled we knew there would be a lot of people trying to find a parking space.  The parking garages would have their higher event rates in place, so our plan was to first try and find a parking meter.

We get downtown several times a year, and know the drill.  A lot of the streets have rush hour parking restrictions, but those end at 6 PM. The parking meters are operational until 7 PM.  So, if you're lucky enough to find an empty spot it doesn't cost much to use it.

We arrived in the area at 6:15, and Tony only had to drive up and down a couple of blocks before he found that magic empty spot and pulled in before we realized that neither one of us had change to feed the meter.  However, the fancy new ones the city recently installed accept charge cards, so I told him I would take care of it.

I found the pay station, input the parking spot number, and inserted my card to pay.  It wasn't until I got the receipt that I realized just how cheap our parking would be: 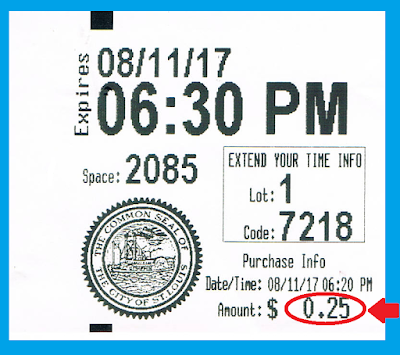 Yes, I put a whopping twenty five cents on my card.  I looked around, but there was no explanation of why there was a 6:30 expiration time.  Maybe it was my lucky day?

Five years ago today: What a Crock