Once the worst of Covid died down, Hubby Tony and I have made regular flights to California to see the kids-once in 2020, twice in 2021, and (so far) twice this year. All of the flights have gone perfectly or with just minor hitches. Until a couple of days ago.

Before we left for the San Jose airport Tuesday morning I checked the Southwest app. The flight was on time, scheduled to depart at 11:30. It still showed as on time when we got through TSA.  We walked around the terminal to kill time, checking on the flight status every few minutes. It was always the same. However, right before boarding was ready to begin Tony got a text that informed him the departure time had changed until 12:20 pm. That meant we wouldn't get into Dallas until 5:50, and would make a tight connection to the second leg of the trip. But I was optimistic; our last few flights arrived slightly earlier than scheduled, and Tony and I can hustle if necessary.

Once the boarding process was completed and all passengers were seated, the pilot came on the PA system and announced there was a mechanical issue he needed to have checked out. It took ten minutes for that to be done, but another 20 minutes to get a supervisor over to log the event. That meant we (along with a lot of other passengers) would miss connecting flights. There were three cities affected, and the head flight attendant told all those passengers to gather their things and leave the plane to be rebooked. We did. 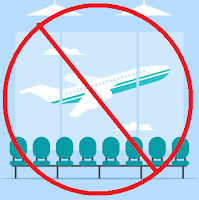 As we were standing at a service counter waiting to talk to a Customer Service agent, I heard an announcement that the airline had resolved the issue and we should return to the gate. We did. By the time Tony and I realized that the 'solution' was rescheduling us on a flight that left Dallas at 10:35 pm it was too late to take advantage of any other options.

Back at the gate, the cabin crew realized that in their haste to let people off the plane they no longer had a  good count of how many passengers there were, so they made everyone deplane, line up in the correct Southwest method, and get back on. By the time that happened, the pilot announced that he had missed his legal flight window time by five minutes. Because he had 'timed out' the airline needed to find a new flight crew.  Then, after the new flight crew was secured there was paperwork that needed to be completed.

By this time people up and milling around the plane. Laptops that would usually be stowed for departure were brought out and powered on. The flight crew passed out cups of water and bags of snack mix, but the delay was so long I also pulled out my in-flight snacks and ate them.

The flight actually left the gate at 4:52 pm. When the plane doors closed people cheered, and it looked like the attendants were as happy as the passengers were.

Once the plane was at cruising altitude, instead of the small bag of snack mix we usually get on our flights the cabin crew handed out "Hawaii snack packs", which also included cheese and crackers, gummy bears, and a tiny bag of four Tic Tacs. In addition, they offered anyone who was of age the first adult beverage free of charge.

I usually don't drink alcohol on planes, but felt like this day called for it. The flight attendant brought me a cup of ice, a lukewarm can of Diet Coke, and a airline-sized bottle of rum. It was hard for me to get the right percentage of alcohol to soda, and because of plane turbulence I was afraid the liquid would slosh out of the cup. I drank it faster than I would have on the ground and ended up with a headache. (Fortunately I had aspirin in my purse.)

The plane arrived in Dallas slightly later than promised, but because there were so many people who were ultimately going to St. Louis they held the second plane so we could get from one gate to another. And then we had to wait an additional ten minutes for the pilot of that flight to arrive from another plane.

That was the last issue, though. Plane #2 had plenty of open seats, there was hardly any turbulence, and we touched down right on time. But all of the delays took their toll. Instead of arriving back at home at a reasonable 8:30 pm, it was closer to 1 am by the time Tony and I were unlocking the front door.

This afternoon both Tony and I received emails from the Southwest Proactive Communications department apologizing for all the issues, and telling us that in the next two weeks we will both be receiving a "LUV voucher" that we can use on another flight. I can't wait to see exactly what that means.