Hubby Tony has been retired for more than a year. One of the things on his post-career bucket list was to go out together for a leisurely weekday breakfast. Can you believe that never got done?

In our defense, we're creatures of habit. Tony usually rolls out of bed before I do and doesn't want to wait around for me to get up before he eats. And I like my routine of pulling out my iPad to read the newspaper and catch up with my virtual friends while I'm sitting at the table.

Last night Tony and I were trying to come up with some way to get our exercise before the temperatures heated up too much. I threw out the idea of walking to the nearby Sunny Street Cafe. Cutting through  subdivisions, it would be about a half hour each way. Tony agreed it sounded like a good plan.

The days are getting shorter, which meant that when I woke up a little after 6:30 the sun hadn't quite made it over the top of the buildings yet. (Yes, I know that's early. Both Tony and I haven't been able to shake the early rising/early to bed habit.) However, by the time we walked out the door 15 minutes later there it was substantially brighter. The temperature was cool, and it was a lovely walk. There were only a couple of cars in the restaurant lot when we arrived, and only a handful of customers inside. We chose to sit in a booth.

As all good breakfast restaurant waitresses do, ours came by immediately and asked if we wanted coffee. We did. The brew was flavorful, and she kept our cups full. I had looked at the menu online, and had tetentively decided what to order, but when I saw they had a 'Senior' menu for people 55 and older I decided to take advantage of it.

My breakfast consisted of two pancakes almost as large as the plate and two strips of bacon. Tony went a little healthier, ordering yogurt, granola, and fruit with a blueberry muffin on the side. (Of course we shared samples of our meals with one another.)

At the end of the meal I went to the bathroom, where I saw this cute mural painted on the wall between the men's and women's rooms. 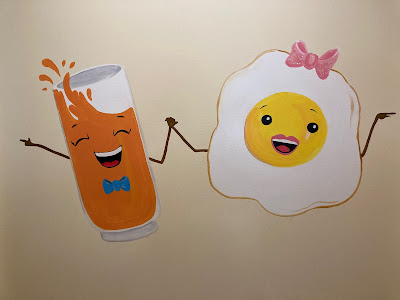