Earlier in the week when Hubby Tony brought in the mail there was an interesting-looking stationary envelope sandwiched in between two pieces of junk mail. It was addressed to both of us by name. The only sign that it might not have come from one of our friends was the addition of the phrase "or Current Resident". It even had a real stamp on it. 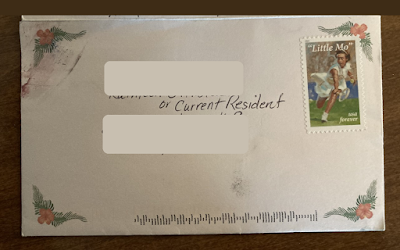 When I turned it over, the envelope flap revealed the sender.

Even though I was pretty sure I knew what would be inside, I still took out the single sheet of stationary and saw a neatly hand written letter. The signature line was pretty anonymous, but it was obvious that someone had taken a lot of time on it. 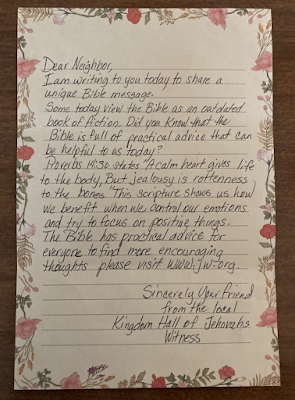 I suspect that Jehovah's Witnesses aren't making in-person house visits because of Covid, and at least some people are intrigued enough by a personal letter (like I was) to open it.

Five years ago today: Errands And Exercise
Posted by Kathy G at 7:41:00 PM