Hubby Tony is much more of a football fan than I am, and even he lost interest in the game when the St. Louis Rams moved back to Los Angeles in 2016. However, he makes an exception each year for the Super Bowl, which is usually the first Sunday in February.

Years ago Tony would go to a 'men only 'watching party, hosted by the father of one of his good friends. When that group fell apart we started watching as a family. Eventually the boys moved away and then it became just the two of us. (I guess we were ahead of the trend. This year the news sources were advising people to avoid socializing for Covid reasons.)

The biggest problem with a small group is that it's hard to have a nice variety of food options. Two weeks ago I pointed out to Tony that a local caterer (The Art of Entertaining) was offering "Big Game" packages for different sized groups-one of which was just the right size for us. Tony placed the order and picked it up yesterday. I was out running errands, but when I got home and looked in the refrigerator the large bag took up almost an entire shelf.

Shortly before game time today Tony got all the food out. There was a selection of vegetables with dill dip, two appetizer spreads (one cold and one warm), crackers, and tortilla chips. We decided the vegetables were a little light for us, so I added some mushrooms and red pepper strips. 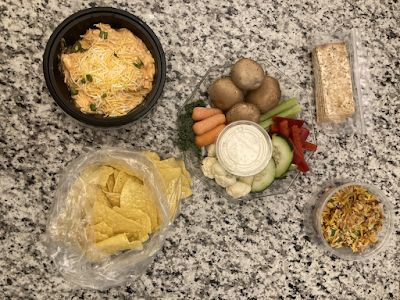 For the main course there were two types of chili (classic red and white bean chicken) and two dollar roll sandwiches (turkey and roast beef). 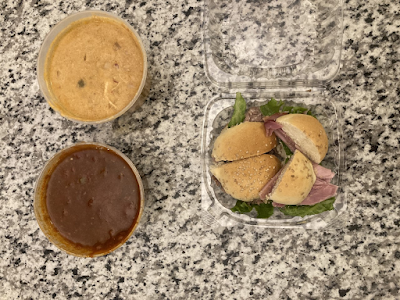 Dessert was a selection of bite-sized bars and a mint for each of us. To make things a little healthier we added orange sections. 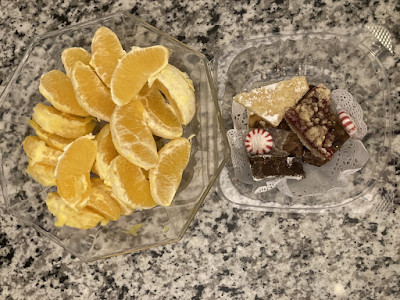 Sunday is Tony's day to cook dinner, so he took charge of microwaving the things that needed to be hot. Once the broadcast started Tony primarily watched the game and my focus was the commercials. Just like always.