Last April Hubby Tony and I purchased a pair of love seats for our living room area. We put a deposit down, and the store told us they would be ready to be delivered at the beginning of September, approximately 20 weeks later. At the end of August I got a call that because of production delays the delivery date was being pushed back into December. At the end of November another call pushed the date back again-this time into February. 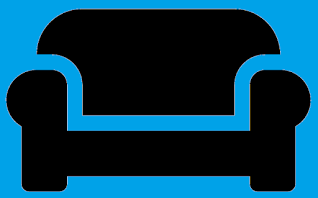 On Monday I came out of the gym and saw that I had missed a call from the store. This time, though, they were calling with good news. Our love seats were in and ready to be delivered! I called the store back and arranged the delivery for today. Their policy is to call the day before with a three-hour delivery window. This afternoon the truck actually showed up two minutes before the beginning of the window but I didn't mind at all.

The first thing the two workers did was move our old couch into the garage. The new seating was more modular (the back cushions were detached from the base), which made for lighter loads to bring in but more of them. When everything was inside one of the workers put all the pieces together and the other one went back outside and organized the truck.

The worker was extremely apologetic. He called the office, took photos of the tags on the underside of both pieces, told me the store office would call, and left. Twenty minutes later the office did call. The man was falling all over himself to apologize. According to the invoice the correct pieces were ordered; the mistake was on the part of the furniture company. Hr said he wanted to know what the store could do to make it right, but before I could say anything he offered to give us a rechargeable battery pack for the power seat.

I discussed it with Tony and we thought that was a sensible solution. Next week we get to wait around for the battery pack delivery. In the meantime, Tony and I will enjoy using one of our new seats.