Being A Little Unconventional

Yesterday afternoon I had some business to take care of near the University of Missouri-St. Louis. Hubby Tony came with me, and we decided to have dinner on the way home.

UMSL is a predominantly commuter campus nestled into a residential area. Google told me there were a couple of college-type bars near to it, but nothing I would want to visit. Tony and I could have gone north into downtown Ferguson, but I know most of the restaurants there, and we were looking for something different.

I expanded my Google search south and west and came up with some interesting sounding restaurants. Unfortunately, both the barbecue and Korean places that had great reviews were carry-out only (which doesn't work when the temperatures are just slightly above freezing). However, the Yelp page of the Mexican restaurant told me that they "specialized in Latin food with an emphasis on Mexican and Central American dishes". One of the pages of their online menu had a collection of Honduran items. As far as I know I've never had food from Honduras, so we decided to go there.

The restaurant was in a very small building. The parking lot was completely dark. If there hadn't been an Open sign in the window I would have assumed the staff had taken the night off. We walked in, found out we could sit anywhere, and took a booth along the wall as far away from the door as possible. (Nothing's worse than having a cold blast of air hit you every time the door opens.) After the waitress brought chips and salsa and took our drink orders I looked around and realized that we were the only non-Hispanic people there, which is usually a sign of good ethnic food.

Seven of the eight menu pages were devoted to Mexican food, but I immediately turned to the unfamiliar page. There wasn't much description of the items, but the words tilapia, pollo, and carne asada gave me a sense of what was in those dishes. When the waitress came by Tony tried to ask her a question, but her English was very limited. He decided that Tacos Honduernos would be a safe choice. I got a little more exotic and ordered Plantanos Honduernos. I love plantains, but I've never seen them on a menu before.

The chips came straight out of a bag, but the red salsa was some of the best I've had. The creamy green salsa had quite a kick. It took a while to get our food, but when it arrived I found out it was worth the wait. 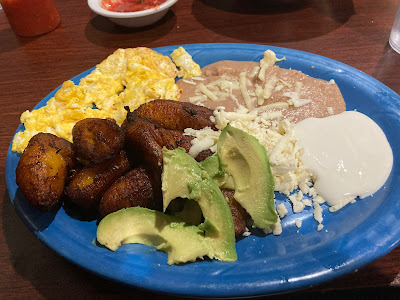 My plate contained a nice-sized pile of fried plantains, accompanied by scrambled egg, sour cream sauce, refried beans, avocado slices, and crumbled queso fresco. Tony's tacos were filled with chunks of pork, rolled, and covered with a layer of very finely shredded cabbage and marinated onions.. They looked more like a fat taquito than a traditional taco. We always share our entrees, and tonight was no exception.

As we exited the building there was another party of non-Hispanic people coming in, and I overheard one say to the other that even though he wasn't particularly hungry this place was so good he would be ordering a complete meal.  I didn't want him to think I was eavesdropping so I didn't answer....out loud. In my mind I was definitely agreeing with him.