What do you do when the temperature outside is about 10 degrees but you still feel the need to get out of the house? You go to a specialty museum that's been on your local bucket list for a while. Today Hubby Tony and found ourselves at the Field House Museum, on the edge of the downtown area just south of Busch Stadium where the baseball Cardinals play.

When we arrived there were only a couple of cars in the parking lot. Inside, the only people I saw were workers. A friendly docent greeted us at the front desk, asked us to sign a guest book for contact tracking purposes, then offered us a tour. That tour was very informative. I knew that the house was the boyhood home of Eugene Field, who wrote poems like Wynken, Blynken, and Nod, Little Boy Blue, and The Duel (The Gingham Dog and the Calico Cat), but I learned that Eugene's father, Roswell Field, was one of the main attorneys in the Dred and Harriet Scott case.

I found out that the tall, skinny building was once one of 12 row houses. All the other ones were torn down in the 1930s, but because of Eugene's popularity at the time this one was saved. Because of the connection to the Scott case, in 2007 the house was designated as a National Historic Landmark. In 2016 an addition was added on the north side of the house to serve as a museum space. 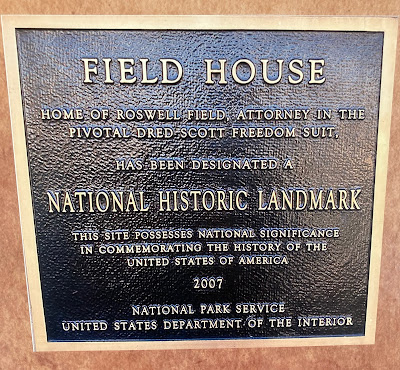 Eugene Field lived in the house until his mother died when he was six years old. At that time Eugene and his brother were sent to Massachusetts to live with their aunt. He attended several colleges (including the University of Missouri in Columbia), but he was a poor student and never graduated. After spending some time in Europe, Eugene worked at newspapers in St. Louis, St. Joseph, Kansas City, and Denver before he moved to Chicago and lived there until he died.

The house had many objects that had been owned by the Field family, and others that were period-appropriate for the building. The third floor of the building had information on the history of the house over the years. In the new section there were several temporary exhibits-one about Missouri becoming a state, and another on different neighborhoods in St. Louis City. Before we left we spent some time in the library, which had a nice collection of Field's works.