Back in the late 1980s a local grocery store had a buy-a-new-volume-every-few-weeks promotion that would ultimately get you a set of Funk and Wagnalls encyclopedias.  Son Tony was just beginning to read.  Each time I'd bring home a new volume he'd grab it and run off to his room, where he'd spend time looking at the pictures and perusing the new information. 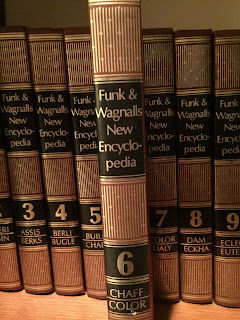 Fast forward to today.  I can't remember the last time I opened up one of the books to get information; the only thing I've used them for lately is weighing down glued craft projects.  I was more than ready to get rid of the 36 inch-long stack of books.  However, since they were outdated, the charities and thrift stores around here wouldn't accept them any more.

I asked for suggestions for getting rid of the set from my Facebook friends, but no one had any ideas. (Except for the person who suggested using them for a huge bonfire.  I didn't take that person seriously.) Another person indicated she'd unsuccessfully tried to get rid of four different sets, which didn't exactly give me confidence for disposing of my own.

Then, as sometimes happens to me, an idea randomly popped into my head.  I wondered if I would get some interest if I listed the set on  Freecycle and Craigslist.  Two nights ago after dinner I composed a post and added it to both sites.  When I woke up the next morning I had five responses...and another five people had contacted me before I deleted the post after the set was actually gone.

With multiple offers to choose from I picked the person with the most appealing story.  It was a woman who told me that, even though she already had several partial sets of encyclopedias she's picked up over the years, she had wanted an entire set ever since she was a kid.   When I emailed her indicating they were hers, she told me she felt like she won the lottery!

After texting back and forth with the woman we settled on a meeting site, and yesterday afternoon I transferred the books from the back of my car into hers.  the woman was as nice in person as she sounded in her text.  At the end of the transaction she gave me a big hug, and I drove away thinking my discards would really be treasured.

Five years ago today: I Guess This Is What Adults Do
Posted by Kathy G at 7:59:00 PM