I Didn't Even Know I Was Celebrating!

The past two evenings Hubby Tony and I have attended back-to-back holiday parties, both organized by volunteer groups he's involved with.

The first one was a potluck.The second one had catered food. Both were excellent, and I ate way too much. This morning I woke up lethargic and bloated, but nothing that some exercise couldn't fix. My plan was to go to the gym and use a treadmill or exercise bike. The last thing I did before leaving the house was check the temperature on my phone to see if I needed my heavy or lightweight winter coat. The temperature was warmer than I thought it would be (close to 40 degrees Fahrenheit) and all of a sudden the idea of driving to the gym and spending time on a machine didn't seem attractive. I decided to take a walk instead.

The weather was brisk but invigorating. From my house I walked south to the first major street, turned left, then after a while hung a left at the street that would take me back to my neighborhood. Halfway there I got a rock in my shoe so I stopped at this cute gazebo and fixed the issue. 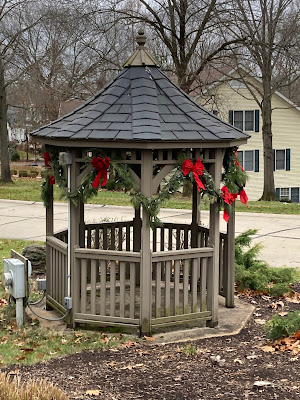 When I reached the subdivision road that would lead back to my place I decided to keep going. Instead of turning I went straight. Along the way I picked up some trash that had blown onto the sidewalk, then deposited it in the trash can at a business. When the road I was on ended I turned left and kept going. At this point the wind picked up and made it a little chilly, so I left the sidewalk and walked alongside buildings whenever possible.

At the strip mall just to the east of a large grocery store I found a cart someone had left and returned it to the correct place. Passing the grocery's plastic bag recycling bin, I learned that they would accept more things than just bags, and I stopped to take a photo for future reference. 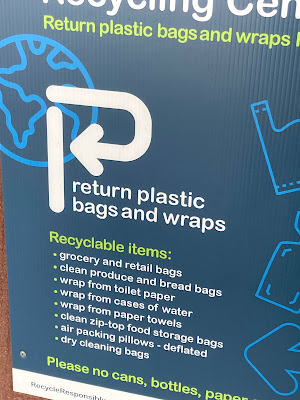 When I left the grocery parking lot and turned on the arterial street that would take me to my subdivision I passed a city Public Safety building. The digital sign in front told me that today was National App Day. So when I was checking the weather before I left and taking photos along the way I was commemorating the day. 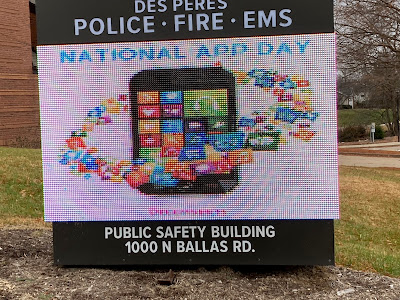