Today Hubby Tony and I hung out an area mall, where we heard dozens of tubas perform Christmas music in concert. 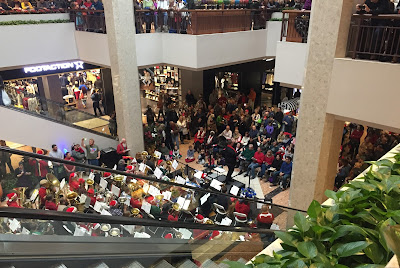 The local event is coordinated by the Tuba Christmas organization, which has been sponsoring concerts since 1974.  It's a big deal at the mall and people really look forward to it.  When I worked at the Customer Service desk people would start asking about the concert weeks in advance.

Tony and I nabbed a spot upstairs against the rail about fifteen minutes before the concert started.  While we waited we chatted with a nice couple who were standing next to us.  When the music began there was a large crowd gathered, and many more people gave the players a couple seconds of their time as they went down the escalator.  Some of the tubas were decked out with lights or Christmas decorations, and the musicians wore festive clothes or hats.

Most of the songs were familiar carols, and on some we were invited to sing along.  The concert lasted more than an hour.  As Tony and I left we decided it had been a great way to spend part of an afternoon.
Posted by Kathy G at 8:30:00 PM