Last Tuesday Hubby Tony and I received a test from Son Donald giving us a heads up that he wasn't feeling well. Later in the week, we mutually decided that it would probably be best if he didn't come to the house for a Christmas visit. Just like that, Both Christmas Eve and Day were empty of commitments. Tony and I could have been upset and frustrated, but we used the time to plan some great adventures.

Christmas Eve was forecast to be almost-record setting warm. After breakfast I turned off the furnace and opened a couple of windows. It was strange, but nice, to hear the outside noises at this time of the year. I had a Zoom meeting and Tony had some last minute things to take care of, but we reconnected shortly before noon. We gave Jackson the Cat an early lunch, then left the house.

Our first stop was the Central West End neighborhood, where we walked around the commercial areas. By this time it was so warm I didn't even need a jacket! Most of the stores were closed, but we still had a good time checking out the store windows. We did find a bakery that was open, and bought cupcakes for dessert with dinner. On the way back to the car we popped into the Cathedral Basilica to see its Christmas decorations.

Our second stop was also a church-the Shrine of St. Joseph (the site of the only authenticated miracle in the Midwestern United States) for Mass. Neither Tony or I had been there before.

There was a security guard standing next to the church grounds when we arrived. He directed us to a parking lot down the street. Mass was at 4:00, but a choral prelude that started an hour before that. We arrived shortly before the official program started and took seats that had a good view of the beautiful main altar. 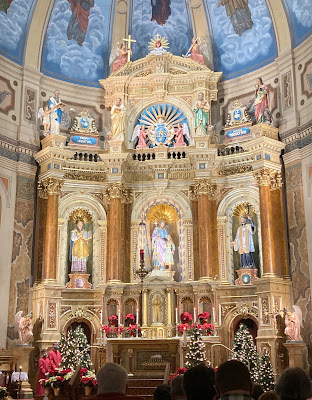 For the next two and a half hours (covering both the prelude and the mass) I was transfixed by the outstanding music coming from the choir loft! Of course there was an organ. I also heard brass instruments, bells, and percussion instruments. I don't know how many singers participated, but their voices melded beautifully. It was a magical experience.

It wasn't hard to navigate the traffic outside the church and get on the highway to head back home. Dinner was simple-salad from a kit, frozen pizza, and cupcakes.  A great way to end a a great day.

Five years ago today: From My House To Yours