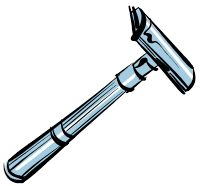 When I was a kid I remember my dad lathering his face with a brush and shaving soap, then shaving with a double-edged safety razor. After I started to shave my legs I inherited one of his razors. I used that razor for decades. When Son Donald was old enough to shave he borrowed it and it got misplaced. For the past decade I've made do with disposable razors.

Two years ago Son Tony announced he'd discovered a "new" way to shave, and had bought himself a safety razor with all the accessories. He liked that it the blades gave him a smoother shave and cost much less than the multi-bladed cartridges he'd been using.  His enthusiasm convinced his dad, and that Christmas Hubby Tony had a shaving package under the tree.

I was now the only one using disposables.  Every couple of months I'd buy a large bag of the cheapest twin blade razors I could find, which did an acceptable job of removing the hair from my legs. However, when I got an Amazon gift certificate for Mother's Day this year I decided to treat myself and purchase a real razor of my own.

I chose a traditional butterfly (twist to open) design just I used to have.  Today I used it for the first time. After so many years the double edged razor took some getting used to; it takes a lot less pressure to get a close shave. I took my time, though, and am pleased to report I completed the job without any nicks.