Several years ago I rescued some potted mums from the sale rack at a big box hardware store.  I brought them home and planted them in the yard.  Only one survived, but it's come up every year since then.  I've divided it a couple of times, and now I get to admire the beautiful flowers in several locations. 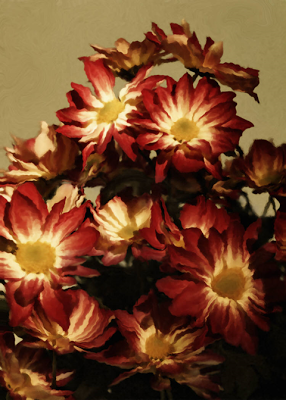 Each spring I can count on the plants being one of the first to sprout. Soon they're tiny green bushes. Left to their own devices, in the fall they would put out a few flowers (half of which would sag because of the blooms' weight).  The drooping stems would leave an unattractive hole in the middle of the plant. After a couple of years of putting up with ugly plants I've learned how to prevent that.  I just have to pinch them back.

The process starts in the spring.  When the stems get about five inches tall I get out the pruning shears and cut half of them off.  I repeat the process every two weeks until the middle of July.  Cutting back the stems encourages lateral branches to develop. The buds develop at the ends of the branches, so by the time the plants bloom in fall they're a mass of short, sturdy stems loaded with flowers.

The task takes about five minutes each time I do it.  That's a small price to pay for the beautiful fall blossoms.