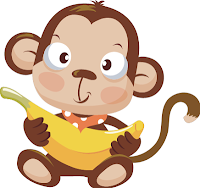 In the April/May 2013 issue of the AARP Magazine there was an article about David Murdock, who says that "anyone who wants to live past 100 can do it".  He thinks that healthy eating is the key.

Halfway through the article I learned that he consumes every bit of a fruit or vegetable--he eats celery leaves and cucumber skins, and throws banana peels and pineapple leaves into the blender for smoothies.

HOLD. THE. PHONE.   Banana peels?!?  Pineapple leaves?!?   Monkeys might eat the entire banana, but not people.

But I have to admit that after I read the article, every time I ate a banana the thought crossed my mind.  Yesterday I was making a smoothie for breakfast.  I poured yogurt into a container, added a large handful of greens on top, and grabbed a ripe banana from the rack on the counter.  On a whim I cut the banana's ends off, chunked it up skin and all and added it to the container, then used my stick blender to puree everything together.

My blender isn't powerful enough to pulverize everything; there were still green specks scattered throughout the drink, but no signs of banana peel.  I couldn't taste anything different, either. Twenty-four hours have now passed without any ill effects from my unusual smoothie add-in..  I don't think I'm ready to start consuming my banana peels on a regular basis, though, and I'll certainly be holding off on those pineapple leaves.  For now.