Yesterday I went into Whole Foods to get a jar of their store label almond butter, but there was none on the shelf.  An associate told me it was on back order and he didn't know when it would be in.  That frustrated me; since I bought almond butter for the first time last year it's become a kitchen staple. There were other brands I could have bought, but they cost substantially more, so I left the store empty-handed.

Since I had some time to kill before I went to work, I decided to go to a nearby Trader Joe's store and see what they had.  They did indeed have almond butter, but right next to it was a spread new to me--sunflower seed butter. 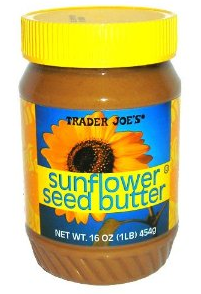 I like sunflower seeds (and Hubby Tony will try just about anything), so I changed my plans and bought it.

This morning I took a good look at the label.  The almond butter I usually buy has just one ingredient--almonds.  The sesame seed butter Nutritional Facts indicated it contained seeds, evaporated cane syrup, and salt.  No preservatives, though.  When I opened the jar there was some seperated oil on top.  I stirred it in with a knife, then  used my finger to scoop up a small sample.