Why Can't We All Just Get Along?

You may remember I dropped our cat Pepper off at the vet Wednesday night for a teeth cleaning appointment on Thursday. Thursday morning, our other cat Jackson was much more affectionate than he usually is. He's usually nowhere to be found when I get up, and sometimes I don't see him at all before I leave for work, but he seemed to enjoy rubbing up against my legs while I was sitting at the desk in the kitchen. He also pranced after me when I went upstairs to brush my teeth. I figured he missed his brother, so I gave him a lot of attention.

When I got off work Thursday afternoon, I headed to the vet's office to pick Pepper up. The front desk person indicated he woke up from his anesthesia very easily, and he was more than ready to leave. The doctor came out and told me he'd cleaned Pepper's teeth and found one small cavity, which he filled. (I didn't even know that cats could get dental work done!) While I paid the bill, someone got Pepper in his carrier and ready to go home.

Pepper wasn't any more excited by this car trip than he was the day before. He cried the entire way, only stopping when we pulled into the garage. I figured Jackson would be waiting in the kitchen since it's always dinner time when I get home from work. Sure enough, he was right by the door with his tail sticking straight up in the air. I set the cat carrier on the floor, opened the cage, and stepped aside to watch what would happen.

I thought the cats would greet each other and do a little commiserating ("So, how bad was it? Glad you're back home.") but I was surprised when the opposite happened. They got a couple of feet from each other, then Jackson hissed and backed away. Pepper looked confused, and I thought it might be a good time to distract them by offering food. They regularly get fed in different parts of the house; today the separation allowed for a nice cooling off period. Afterwards, Pepper tried to approach his brother and got rebuffed again. The cats ended up going different directions for their after-dinner nap.

When I checked up on them later in the evening, they were laying on separate sides of my bedroom, occasionally sneaking furtive glances at each other. Jackson looked like he was ready to run under the bed at the first sign of anything amiss. When Pepper came over to see me, Jackson hissed at him. I could think of two possible explanations for the behavior. Either Jackson decided he liked having the house all to himself and wasn't happy about sharing it again, or Pepper carried some type of "hospital" smell that triggered memories of his visit to the animal emergency room for an abscessed bite a couple of years ago. 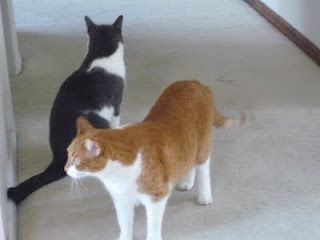 When I woke up today Pepper was stretched out at the end of the bed and Jackson was nowhere to be found. I came downstairs and saw that he had taken the prime sunny spot in the family room. The cats seem to be co-existing, but not much more. If one enters the room, the other leaves. They take turns drinking from their communal water bowl, but as the day's gone on there's less and less antagonism. I'm hopeful that soon the drama will all be over and things will be back to normal.
Posted by Kathy G at 7:25:00 PM