We were sitting down to dinner on the deck tonight when I heard a loud ruckus coming from a bush in our neighbor's yard. The whole thing shook violently, then a huge bird flew out of the bush and into a nearby tree.

Twenty minutes later the bush started vibrating again, but after a few seconds the bird flew out of the bush and away from our house. I was able to get a glimpse of its dark body, large wings, and a large horizontally-striped striped tail. I knew it was some type of bird of prey, but since I don't know a whole lot about them, today I researched Missouri's raptors. 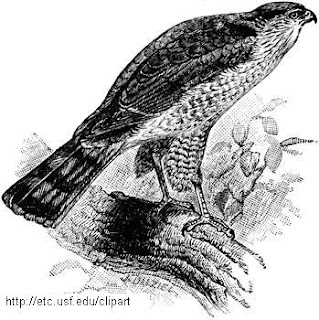 There was actually a great article about the subject in the Missouri Conservationist magazine earlier this year. I learned that:

"Cooper’s, merlins and sharp-shinned hawks have adapted to wooded suburbs and are attracted to concentrations of small birds, including those around bird feeders. These hawks are swift and agile, able to catch birds in flight."

However, I wanted to know specifically which bird I'd seen tonight and this article didn't have pictures of the different types of suburban raptors, so I kept researching. Another Webpage from the Missouri Department of Conservation called Eagles, Hawks, Kites and Osprey did. It also had great information about the habitats and diets of each bird.

After all my research, I concluded I'd seen a Sharp-shinned hawk. It was the bird's tail that helped me decide. The one I saw was definitely squared-off, which is a characteristic of the Sharp-shinned.

I know our neighborhood has a plethora of birds, bunnies, and squirrels, so I'm guessing the hawk is finding plenty to eat. You never know what's living in your neighborhood!
Posted by Kathy G at 9:30:00 PM