Yesterday Tony and I went shopping at the Kirkwood Farmer's Market. Among other things, I was in search of "cheap" tomatoes to use in my dehydrator. Most of the booths were showcasing organic or heirloom tomatoes, but that wasn't what I needed. These premium tomatoes are expensive, but worth it if you're looking for fruits to be eaten straight up. However, if you've ever eaten a sun-dried tomato, you know that the drying process intensifies the flavor and makes even normal varieties taste wonderful. I was looking for quantity, not quality.

At the far end of the market, I finally found what I was looking for. Standard homegrown tomatoes. I asked the person staffing the booth if he grew them himself, and learned that they came from his farm outside of Jefferson City. There were piles of slicing and Roma varieties; all were deep red and shiny, but not too perfect, so you knew they were indeed homegrown. The tomatoes were priced at $1.25/lb or 10 pounds/$10.00, but the salesperson offered to sell me 20 pounds for $15.00. He gave me a box so I could select the ones I wanted. Romas are better for drying, because they have fewer seeds and are less juicy, but I also picked some slicers for variety. I added some yellow squash and a few peppers to my order, paid for everything, and graciously let Tony carry the box to the car.

When we got home it was time to start the drying process. I blanched the tomatoes, dumped them in an ice bath, and took the skins off while Tony sliced the peeled fruits and arranged them on the dehydrating trays. My instruction book told me they would be done in 6 to 12 hours (depending on the size of the slice and the amount of humidity in the air). Sure enough, at the six-hour mark some of the pieces were ready to come out. The first specimens didn't even make it to a storage container; I popped them in my mouth and savored the intense burst of tomato goodness.

Every hour or so I'd check the trays and take out the slices that were dry. It takes 20 pounds of tomatoes to make one pound of the dried variety, so there's a lot of shrinkage! Tony joined me in eating a few of the slices, but the majority of our labors went into a Tupperware container for later use.

We used about half of the tomatoes I bought to fill up the dehydrator trays. Here's the result: 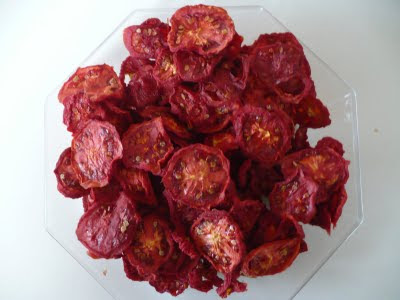