We waited until after dinner tonight to do yard work, but it was still extremely hot and humid. I was trimming some bushes in the front yard, and by time I was done I had sweat dripping off my nose and running into my eyes, and my clothes were soaked. I put the tools away, came inside, and took a shower. 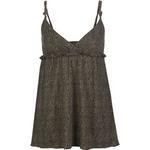 I didn't feel like starting over with a new outfit just a couple of hours before bedtime, so I put on a pair of pajamas. The top of this pair is styled like a chemise, with an empire waist...similar to this picture, but mine is made from a pink cotton-blend material and has yellow trim around the top edge. The bottom of the set is styled more like underwear, though, so I added a pair of shorts to walk around the house in. If someone came to the door, I wouldn't want to traumatize them!

After I came downstairs from the shower, I was still dehydrated from sweating so much; I realized that a frozen drink would really hit the spot. The Cardinals had scored six runs in last night's game, so Mobil On The Run was having their quarter drink promotion today. I decided I was dressed well enough to run to the gas station, so tonight I left the house wearing pajamas.

There were several people who also taking advantage of cheap drinks, so I had to wait my turn to get a slushy. I felt a little underdressed in my pajamas, but nobody in the store gave me a second look.
Posted by Kathy G at 9:12:00 PM