A couple of weeks we took the cats in for their annual checkup. After she took a look in his mouth, the vet told us that Pepper needed his teeth cleaned. I wasn't surprised, because he and Jackson are the same age (they're litter mates), and last year we had Jackson's teeth done. If you've ever had a cat's teeth professionally cleaned, you know it's a big deal. Since a cat won't voluntarily open up his mouth and say ahh, the dental cleaning involves general anesthesia. While Pepper is sedated he'll have an oral exam and have his teeth scaled and polished.

Tomorrow is the big day. When I called to make the appointment they told me I'd need to drop Pepper off before 9 in the morning and leave him there all day. Just like if I was having a procedure that involved general anesthesia, he can't have anything to eat or drink after midnight tonight. Pepper would have made everyone miserable tomorrow morning if he didn't get his breakfast at the scheduled time, so I chose to drop him off tonight for his big adventure tomorrow.

Here's Pepper in his carrier looking extremely stressed out. He cried piteously the entire four mile trip to the vet's office. 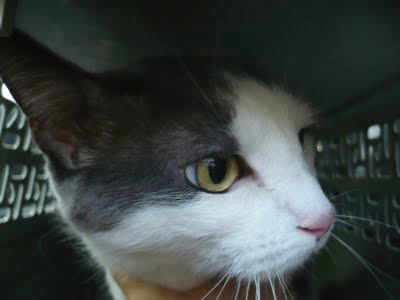 Before I left Pepper with the front desk staff at the vet, I had to sign a form giving them permission to do the procedure. I handed the carrier to the receptionist, said goodbye to Pepper, and left. The car felt very empty when I drove away.

Even though they usually spend a lot of time together, Jackson doens't look too concerned about his missing brother: 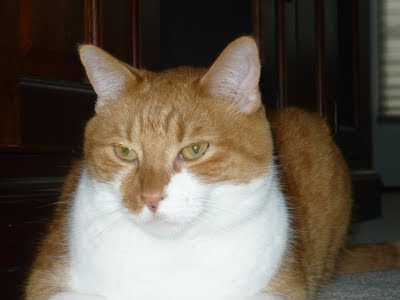 Pepper will have his procedure tomorrow and I'll pick him up on my way home from work. My teeth always feel so good after a professional cleaning. I don't know how much Pepper will appreciate it, though.
Posted by Kathy G at 8:12:00 PM