Today was Jackson the Cat's least favorite day of the year...his annual visit to the vet for a checkup and shots.

Going to the clinic is the only time Jackson typically leaves the house, and he doesn't enjoy anything about it.  When I brought the carrier up from the basement yesterday he gave it a sniff, then gave it the stink eye and a wide berth.

Jackson's appointment was mid-afternoon, shortly after his lunch. I hoped that he wouldn't have a chance to find a secluded place for a nap, but the condo doesn't have many places for a cat to hide and when it was time to leave Jackson was easy to find. As soon as he was locked into his carrier he started a mournful howl, which continued sporadically all the way to the vet. 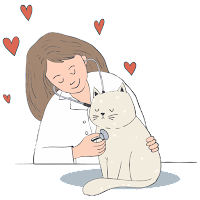 Last year the office did curbside-only appointments. This year they allowed one person inside, but you had to call from the parking lot first and get permission to enter. Hubby Tony wanted to be Jackson's person. I agreed. However, I decided to come along too and pass the time reading a book.

The clinic is on Manchester Road (a major arterial street) and it's always hard to gauge just how long it will take to get there. We ended up arriving five minutes early, and when Tony called he found out there wasn't an office ready yet. We waited in the car until Tony got word that they were ready for him. He carefully removed the carrier from the back seat of the car and carried it across the parking lot.

I got my book out and started reading. Fifteen minutes later my phone rang. It was Tony, who put me on speaker phone so I could hear and be a part of his conversation with the vet. I learned that Jackson has some geriatric-cat issues, but for the most part he got a clean bill of health. As the vet left the room Tony ended the call, and five minutes later he had finished the paperwork part of the visit and was ready to go.

Five years ago: Gimme A Subject