Good For Animals And People Too

A while back Hubby Tony told me he had misplaced his styptic pencil (which he uses to stop the bleeding from shaving nicks) and asked me to add it to the grocery list. I was happy to oblige. However, I could not find styptic pencils in any stores. Tony joined in the hunt and also came up empty handed.

I checked some online retailers. They had styptic pencils, but they either came in packages  that were larger than we needed or were very expensive. One day on a website dedicated to shaving I read a discussion about styptic powder as an alternative to pencils. A poster suggested buying it from a pet store. Evidently it's a common remedy used by groomers for blood due to clipping nails, and other superficial cuts and scratches

I checked with my local pet store-they had it in stock-and I picked it up the next time I was in the area. 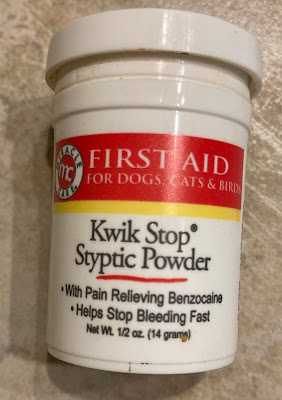 Tony used the powder and said it worked just like a pencil would have.  Some time later I was shaving my legs and ended up with a cut on my shin. I wondered if the styptic powder would work for me, too, and decided to try it out. I followed the directions, which said to "Apply with moistened cotton tip applicator to the cut, nail, or other superficial bleeding area using moderate consistent pressure for five to ten seconds".  The powder stung like crazy for a few seconds, but the bleeding stopped immediately.

Five years ago today: My Trash Is Your Treasure