A Yam Is Not Always A Yam

Did you know that sweet potatoes and yams are actually two different vegetables? I came across this video some time ago that described the differences and decided that I would try to find a true yam to see what it was like.

This week the Asian market had African yams on sale for 99¢ a pound, cheap enough that I could satisfy my curiosity. The one I purchased was about a pound (on the small size, as the tubers can be up to five feet long).

Once the yam was in the house I had to figure out how to cook it. Wikipedia said "The most common cooking methods in Western and Central Africa are by boiling, frying or roasting."  However, even when I searched for African yam recipes many of the hits were actually for sweet potatoes. However,  I eventually took elements of several different recipes for Yam Stew and came up with my own spin. My dish had chunks of yams, garbanzo beans, and chopped bok choy simmered in a spicy tomato sauce. I served it with brown rice and more hot sauce on the side. 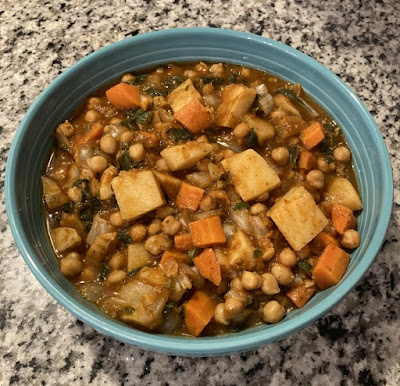 After they were cooked the yams looked like cubes of potatoes. However, if I had cooked potatoes for the same amount of time they would have been falling apart. The yam cubes were firmer and starchier. Overall, pretty good.