When I was getting ready to go to the grocery store this morning I whacked my right foot on the closet door frame. After letting out a few unprintable words I bent down to examine the damage.

The fourth toe (the little piggy who had none in the rhyme) had taken the brunt of the whack. I could manipulate it in all directions, so I was pretty sure it was bruised instead of broken. There wasn't a whole lot else I could do, so I put on a pair of shoes with a wide toe box and ran the errand.

When I got home I iced the toe a couple of times and generally babied it. After Hubby Tony got off work he said he was going to walk and asked if I wanted to go. The shoes with the wide toe box still felt comfortable, so I decided to join him. After some initial pain my toe actually hurt less than it had in the house. Our route took about 45 minutes.

I was feeling pretty good about how well I had handled my injury until I opened up my iPhone Health app to check my steps and other statistics. The most recent update for the phone included what Apple calls "Mobility Metrics". One of them was Walking Asymmetry, described as "the percent of time that your steps with one foot are faster or slower than the other foot". That would also include uneven walking patterns like limping. Based on the graph, I guess I was. 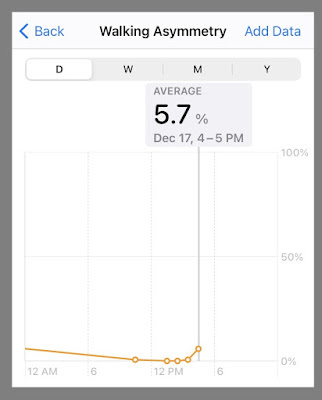