Part of my walk today took me through the parking lot of a large strip mall. Halfway through the lot I stared to hear music. Eventually I saw a middle-aged man sitting in a folding chair in a small island close to the stores. He was performing on a large accordion, and had a karaoke music machine next to him to provide background music and amplification. 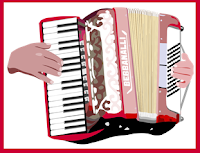 (I've often walked by people playing on busy street corners, but this is the first time I've seen a musician set up shop in a parking lot. It's probably a good place, with lots of cars driving by and foot traffic from people going into stores.)

There was a hard-to-read handwritten sign propped up on the karaoke machine. From what I could make out the man had lost his job, had a family to support, etc.

I've been scammed enough that I don't give money to down and out people, but this felt different. It was about 40 degrees outside, and this man was more of a busker than a panhandler. I looked in my wallet, but all I had was a $20 bill and some change. It didn't feel like enough but I dumped all the change into the man's tip bucket. Without missing a note, he smiled and thanked me.

I walked to the far end of the strip mall, then doubled back. When I went by the man again he was standing and dancing around while still playing his accordion, I'm guessing to warm himself up.