He's Deciding To Hang It Up

Hubby Tony has been working at full-time jobs for more than four decades. For the past few years the subject of retirement occasionally came up (usually when an acquaintance made the big lifestyle change), but for Tony the event was always somewhere out in the future. In his past seven months of working from home I sensed that the idea was becoming more and more appealing to him.

Once Tony finished up a significant project in September he started seriously talking about setting a date. At his employer it's considered best practice to give six months notice. That insures his supervisor won't assign him any new projects, allows him to attempt to wrap up any loose ends on the existing ones, or arrange for their transfer to someone else. Eventually Tony decided that the end of March would be a fine time to start the new chapter in his life. 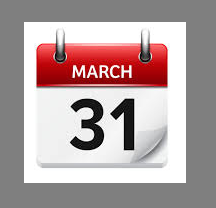 Once the date was set, Tony relayed the information to his boss and the rest of the family, and started mentioning it to coworkers as he Skyped or texted with them. He also started the process of filling out the necessary paperwork.

Now that things have been officially put into place, we're measuring time by how long it is until Tony's big date. Based on past experience, I know the months will fly by