A 'Dog Park' For Cat People

A couple of weeks ago Christine wrote about cat cafes (a coffee shop that has cats for you to play with) that were popping up in different cities.  I'd never heard of them, and commented that I thought I'd just stay home with my own cat.  Well, I've changed my mind.  Tonight Hubby Tony and I visited the Tenth Life Cat Rescue for their first-ever Kitty Cafe.  It was a blast!

Tenth Life was founded in 2009.  It's mission is to save stray cats and kittens in the St. Louis area, particularly those with special needs. They are a no-kill shelter, and euthanize cats only when they have reached a state of incurable suffering. 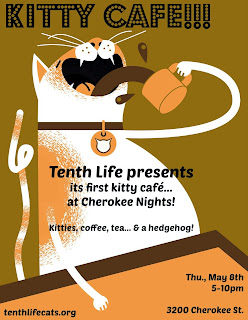 The cafe took place at Tenth Life's storefront.  When we walked up there was a volunteer standing guard outside, and another immediately inside.  At first I thought they were just being friendly and greeting everyone, but then I realized they were also watching to make sure no kitties escaped when someone opened the door.

The small room was packed with people holding cats, playing with cats, and talking about cats.  We grabbed a cup of coffee and chatted with one of the volunteers that were circulating around the room.  I learned that normally there are only six cats living there (the majority of the cats are in foster homes), but for tonight's event they'd also brought in two litters of kittens.

In addition to drinking some great-tasting coffee, I got to hold several of the kittens and pet a couple of the mature cats that had taken shelter in a tower of climbing structures that covered the front store window.  Eventually Tony and I got our fill of cat petting.  Until next time.