The winter storm they were forecasting Sunday took an extra 12 hours to get here, but when it did it arrived with a vengeance...rain changing to sleet then to snow, which will continue until tomorrow.  Nasty stuff!

In our area Interstate 44 is the dividing line between big ice and big snow.  We're less than five miles from that line, so I'm not exactly sure what we'll get.  At mid-afternoon there's still sleet bouncing off the skylight in the kitchen.  I went out to the garage to put some cans in the recycling bin. When I stuck my finger in the white icy stuff, it came up past my first knuckle

Last night I went to bed knowing that my school was cancelled for the day.  Tony's office is closed today (which only happens about once every decade)!  If it hadn't, he was planning on working from home. However, with no work commitments this morning, he got busy in the kitchen.  When I came downstairs I was treated to the smell of freshly-made pancakes, and the bottle of real maple syrup was already on the table.

Since I'm housebound, I decided today would be a good time to tackle a project of two.  First up was the decrepit cat scratching post in the family room, which looks like this: 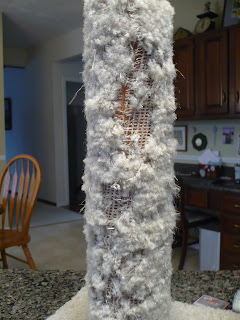 We have three posts scattered throughout the house, but I think this is the cats' favorite.  As you can see, there's been a lot of scratching done on it.

Last time I was at the pet store buying food, I checked out their inventory of scratching posts. All they had were huge pieces which wouldn't fit into my available area.  However, I saw that many of them had uprights wrapped in rope, which made me wonder if I could use rope to rejuvenate my old post.

Next time I was at the hardware store I bought a 50 foot package of sisal rope.  This morning I opened the package and got ready to do some serious wrapping.  After attaching the rope to the base with hot glue, I wound it up the pole, stopping every few turns to push it down tightly.  Here's the finished product: 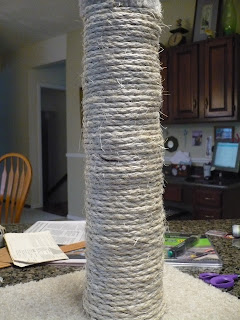 I underestimated the amount of rope I needed; the top three inches of the post still have exposed carpet, but since the cats don't scratch up there it was still in good shape.  The pole is now back in its corner of the family room,  waiting to be put to the test by Jackson and Pepper's nails.
Posted by Kathy G at 2:28:00 PM