When we bought our buttons on New Year's Eve for First Night, we also got a flyer that listed discounts at other arts venues in Grand Center. Today we took advantage of one of them when we went on a trip to the Contemporary Art Museum St Louis. 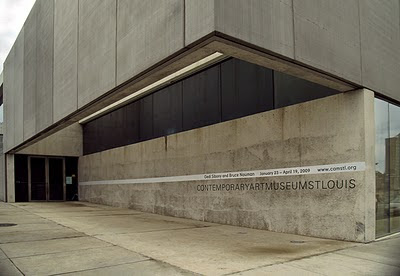 There was a lot of traffic in the Grand Center area, since a couple of the theaters had matinée shows, but after a bit of driving we found a parking spot on the street close to the modern-looking concrete Contemporary building.  We were greeted by a volunteer right inside the front door, who informed us we didn't need to show our buttons.  Today was a Free Family Day and there was no admission charge!  She pointed us toward the galleries and told us to have a good time.

The museum has concrete floors and high-ceilinged rooms.  One of the rooms was filled with children doing activities. We could hear them from the other rooms, which was nice because it made the building less "museum-like". The small Front Room gallery was filled with two- and three-dimensional works by John Opera and Matt Sheridan Smith, and the Main Gallery featured an exhibition called Richard Aldrich and the 19th Century French Painting.

The walls in the Main Gallery were lined with works.  Most of them were by the featured artist, but on one wall there were four 19th century French paintings from the Art Museum.  All of Aldrich's pieces were large.  Some were abstract, some included text, and some were of objects.  I don't pretend to know the first thing about this type of art, but I enjoyed everything in the gallery.

After we finished studying the art in the Main Gallery we walked around the rest of the museum, stopping every now and then to look at something that caught our attention.  It was a great way to spend the afternoon.  As we left, the volunteer at the door offered us candy from a large bowl, which made the adventure even sweeter!
Posted by Kathy G at 8:32:00 PM