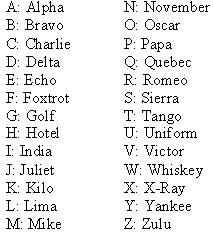 I found out, though, that it's not necessary to do all the work yourself.  There's a Website for it.  MilitarySpot.com has a form that converts text to the phontetic alphabet used by the U.S. Military.  To try it out, I typed in the first two lines of the song "Taps":


Day is done, gone the sun
From the lakes, from the hills, from the sky

This is what I got back:

You never know when something like this might come in handy.
Posted by Kathy G at 8:21:00 PM