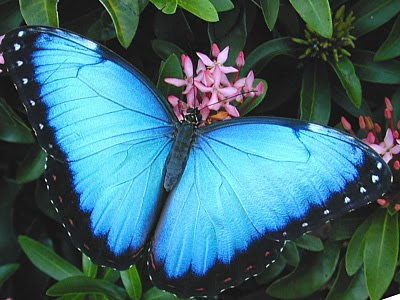 Although it's been open for more than a decade, today I visited a place I've never been before, the Sophia M. Sachs Butterfly House in Faust Park.
During "March Morpho Mania" the Butterfly House greatly increases the number of Blue Morpho butterflies. This month there are more than 3,000 fluttering around, in addition to the approximately 1,000 other tropical butterflies on display. Although I put the event on my calendar for sometime during the month, I was waiting for the right day--chilly and rainy, to take advantage of being inside a tropical place. Today fit that description.

There weren't a lot of cars in the parking lot when I arrived mid-morning, and I jogged through the raindrops to reach the entrance. After buying a ticket, I entered the building. With my admission, I got a brochure that included a Species Identification Guide that included pictures of the most commonly exhibited species and a "March Morpho Mania" quiz. By completing the 5-question quiz I could get a gift and a discount in the gift shop.

Before I entered to see the main event, I looked at the exhibits in the Grand Hall, an interesting display of other insects. There were arachnids, invertebrates, and several types of cockroaches. Thank goodness they were all behind glass! When I'd had my fill, I got in line to enter the Tropical Conservatory, where the butterflies reside. I had to wait a few minutes before I could enter. After a half-dozen people had collected, a volunteer opened a door and let us into a small vestibule. She explained the rules (watch our for dampness on the walkways, don't touch the butterflies), then opened the inner door and let us into a paradise.

The first thing I noticed when I entered the Conservatory was the heat and humidity. (It was so humid, my glasses fogged up momentarily.) The next thing I noticed were butterflies. They were everywhere-flying through the air, on the ground, and resting on plants. The room was filled with tropical trees, vines, and flowers.

The Conservatory is a giant greenhouse; it has exterior walls made of glass. A circular path looped around the outer perimeter of the room, and meandering paths cut through the middle. The sound of a small waterfall in the center echoed throughout. I wandered around in amazement, then sat on a bench, where a Blue Morpho landed just inches away from me. The underside of its wings made it quite nondescript, a startling contrast to the bright blue of the top. After a few moments of rest, it was off again.

Sadly, I couldn't stay in the Conservatory all day so after I'd seen everything it was time to exit. Again, there was a double door vestibule. This time, we were asked to check for butterflies on our clothes, hair, and belongings (even inside purses) before the outer door opened.

The Grand Hall was much fuller now, with some children on a field trip and a group of people from a senior center, many of whom were in wheelchairs, along with their attendants. I made my way to the gift shop to turn in my quiz and receive my gift. I decided not to take advantage of the discount, so I exited the building and went back to chilly, rainy reality.
Posted by Kathy G at 3:15:00 PM