Son Donald and I cooked dinner together tonight. I provided vegetables, condiments, a bit of brown rice, and dessert, but he supplied all the important things. At my request, he brought some exotic ingredients from his kitchen. Some of the items in the bag he brought (like tofu) I rarely use, and some were new to me...rice paper, dried shitake mushrooms, and miso.

For an appetizer, Donald showed me how to make spring rolls. We dipped the rice paper in water, added vegetables, and rolled it like a burrito. The wrapper stuck to itself so the ingredients couldn't fall out. I mixed peanut butter and miso to accompany the rolls, but we also pulled some balsamic vinaigrette out of the refrigerator to use as a dipping sauce. Nothing like mixing cuisines! 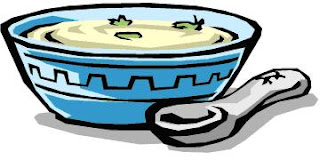 We continued to make and eat spring rolls while Donald worked on the soup. He directed me to soak the mushrooms in boiling water and cut the tofu into cubes. He boiled water while I sliced the mushrooms into small pieces, then added them, along with their cooking water and the tofu, to his pan. After the water boiled, he removed some of it, added it to a few spoonfuls of miso, and stirred it until no lumps remained. The miso mixture went back into the main pan and it was time to eat. He ladled the soup into two bowls and we sat down at the table.

I've never eaten miso before, so I didn't know what to expect. It was quite good! Donald suggested I add a few drops of hot sauce, which made it taste even better. The simple soup was quite filling. We ate the entire pot. After dinner I exchanged a small container of cashews for a bit of miso and a few mushrooms so I could make the soup again.
Posted by Kathy G at 9:31:00 PM