Last year when a Realtor gave us ideas for updating our property, we found out that the polished brass light fixtures throughout the house screamed 1980s. She suggested that we change them out for something a little more contemporary, and said it was a job we could do ourselves. 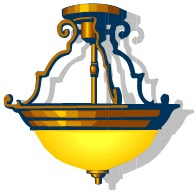 Yeah, right, I thought. Electricity scares me. But after taking a basic wiring class last night, I think I might be able to tackle the job.

The one-night class was offered by the Continuing Education department of the community college. Since this was a non-credit course, I just had to show up. There were no books to buy, homework to complete, or tests to study for.
Even though I had never been to the branch of the college where the class was held, it was easy to park and find the correct building and classroom. I arrived a few minutes early, but I wasn't the first one there; several other people were already waiting in the hall outside the room. By the time the class started, there were two dozen predominantly middle-aged people sitting in the desks.
Linda, the instructor, was a contractor; this electrical class was one of a series of basic home repair classes that she teaches. The two-hour class covered all the basics--wires, boxes, outlets, switches, fixtures, and breakers. Since I live in a newer house, some of the material wasn't applicable to me, but most of it was.
At the end of the night, I had a mental list of several possible electrical projects. Hardware store, here I come!
Posted by Kathy G at 7:33:00 PM