Who You Gonna Call? FurBusters!

Jackson and Pepper, our cats, have declared it shedding season.

They're always losing a moderate amount of hair, but the shedding kicks into high gear as the weather gets warmer. Cat fur balls are huddled in corners of the house where no one walks. Any fabric surface they come close to is covered with an even layer of cat fuzz. Yesterday Tony took his blue blazer out of its storage bag and there were a few hairs on it!

I guess we have to take some of the blame, because we don't brush the cats on a regular basis. A friend told me she bought a fancy groomer for her dog at Target that did a great job of removing loose fur. Today I decided to declare war on cat hair; I purchased a "professional De-shedding Tool" called the FurBuster.

A must have for all pet owners! Pets shed hair every day – you see it on the carpet, on the couch and all over your clothes. The new FurBuster De-Shedding System reduces shedding with minimal effort and without busting your wallet!

The tool has a stainless steel blade that removes loose hair and undercoat. The blade, which looks like a very small thatch rake, snaps easily into a padded handle. (There are three blade sizes for different sized animals, but only the smallest came with my set.) At almost $15.00, the FurBuster wasn't cheap, but the cost would be worth it if it got rid of some excess cat hair.

I brought it home, opened the package and decided to show the cats their new grooming accessory. They were not impressed. Pepper, the more skittish of the two, immediately ran upstairs where we couldn't get him. Jackson sniffed it, then cautiously moved just out of arm's reach. 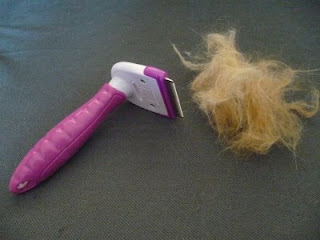 After a couple of tries over a period of several hours Jackson got the hang of it, and decided it was ok to be groomed. He was laying on the back of the blue couch--his favorite place in the family room. Tony brushed him for a few minutes before Jackson got bored and sauntered out of the room. Tony did get a big wad of hair out of his coat, though, so I was satisfied.

Pepper, however, took more convincing. He hid under a bed upstairs for quite some time, but after dinner I found the two of them curled up on the couch in the living room. I brushed Jackson a bit and he started purring. Based on his brother's recommendation, Pepper then deigned to let me "dethatch" him. His coat isn't as thick as Jackson's, but I did get a good bit of hair before Pepper decided our time was up. He jumped down and strolled away.

I'm confident that if we use the FurBuster on a regular basis, it will be the end of tumble weed-like hair balls and tufts of hair laying on the carpet. I hope the cats see it the same way!
Posted by Kathy G at 8:45:00 PM