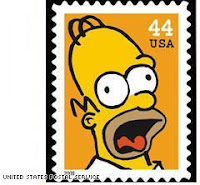 When I put a stamp on an envelope, I usually choose commemorative stamps over the generic ones. I love the variety they add to my mail, and I enjoy making a new choice each time I go to the Post Office. I was excited to learn that on May 7th some commemorative stamps will issued featuring The Simpsons--Homer, Marge, Bart, Lisa and Maggie.

After they unveiled the artwork yesterday, the Post Office announced a promotion to allow people to vote for their favorite. Today I voted for my favorite Simpsons stamp.

Random facts:
Voting for my favorite stamp was easy. I scrolled through the five stamps, and clicked the button. Voting began on April 9th and will go through May 14th, 2009. The website encouraged me to "vote early and often"; I may just do that!
Posted by Kathy G at 3:53:00 PM