Yesterday I finished up my census assignment in De Soto, and got to move to Festus, another area of Jefferson County. It's about 15 minutes closer to the Interstate, and significantly more suburban. However, just when I though I was back in St. Louis County, I'd encounter a bumpy gravel road with a handful of houses along it, or a long twisting driveway leading to a house tucked way off the main road. My car will need an alignment soon!

I arrived home tired, hungry, and ready to settle in for the night. Much to my dismay, I remembered I had plans. An organization I belong to was having a Bunco fundraiser at church, and I had volunteered to work. After dinner I showered and left again for the evening. 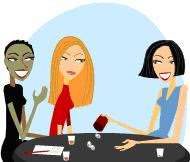 Bunco is a dice game usually played in small groups, predominantly female. It's a good excuse to get together to talk, eat, and drink. Sometimes the game itself is almost an afterthought. Our organization decided to enlarge the concept. The evening, called A Bunch For Bunco, is held in the school gym. This year we had 60 participants (all women, although there have been a few men attendees in previous years). Since players change seats after each round, it's a great way to meet new people.

Some of the women were familiar with the rules of Bunco and some had never played before. However, since the game is very simple before long everyone was happily rolling dice and tallying their scores. Occasionally someone would yell out when they had a good roll, but for the most part the room was pretty silent during play. The first year we hosted this event, the sound of dozens of dice hitting the tables was overwhelming. We now provide place mats for the center of the tables to muffle the noise. Between each round, as the players moved from table to table, people renewed acquaintances with old friends and chatted with others they had just met.

For their admission price, the attendees were provided with Bunco supplies, snacks, desserts, and beverages. Most everyone went home with an attendance prize, and there was a small silent auction for those interested in bidding. At the end of the night after the big winners were announced and everyone who had won a silent auction item claimed their prize, the room cleared pretty quickly. Plans are already in the works for next year's event.
Posted by Kathy G at 3:10:00 PM