I've been trying to cook with more whole grains lately, including the bread I make in the bread machine. However, it's a challenge. White bread flour has enough gluten to make a nice fluffy loaf, but whole grains tend to not rise as high. It's a matter of getting the proportions right. Overall I've had pretty good luck.

Monday I was making a loaf of caraway rye bread. I put all the ingredients into the bread machine in the proper order, hit the Start button, and left to run some errands. I returned home right as the bread finished baking. However, instead of a nice loaf, the bread looked like this: 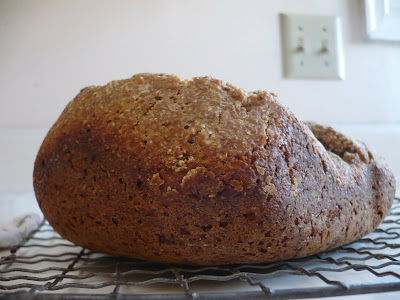 The brick-like blob was about a fourth of the size it should be. It tasted ok (if you like super-dense, cakey bread), but certainly wouldn't work for the roast beef sandwiches I was planning on for dinner! In all the years of using a bread machine, I've never had a failure like this.

After I changed my dinner plans, I tried to figure out what to do with the nightmare loaf. I have a problem throwing out any kind of food, so that wasn't an option for this yeasty abomination. A little Internet research revealed a couple of alternatives. Today I made bread soup so I could avoid wasting my bread.

I found recipes for Bread Soup from both Portugal and Italy. All the recipes called for white bread, so I couldn't follow any of them exactly-the caraway taste in my loaf was pretty assertive, and probably wouldn't go well with the Portuguese cilantro or the Italian basil. I hardly ever follow a recipe exactly, though, so changing things around wasn't new to me. In the end, I used a Tomato Bread Soup from Mario Batali as my inspiration.

I cooked onion and garlic in some olive oil until onion was translucent. Mario recommended fresh tomatoes, but I added a can of tomatoes and cooked the whole thing until the tomatoes begin to soften and break down. I cut half my mutant loaf of bread into cubes, and added it to the pot with some vegetable broth. The chunks were a little slow dissolving, so I used a whisk to break up the cubes, then simmered it until the bread absorbed most of the liquid. To serve it, I added a handful of shredded cheddar cheese to each bowl before I ladled in the hot liquid.

The soup didn't look great, but it was edible. Since today was Ash Wednesday, a day of fasting, it was probably appropriate that my lunch not be too fancy!
Posted by Kathy G at 4:21:00 PM