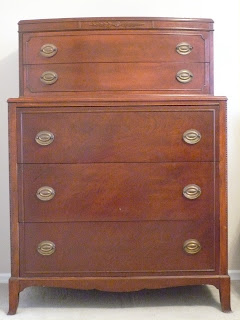 When my parents got married in the 1940s, their bedroom set was Hepplewhite style. It consisted of a full-sized bed with headboard and footboard, a dresser, a highboy dresser, a wall mirror, and a bedside table.

In the 1960s my dad cut off the top of the footboard, making it the same height as the mattress so my mom could throw a bedspread over it. He also use an antiquing kit to paint the whole set olive green. It stayed that way for decades. When my mom passed away in the mid 80s, I acquired the set. We stored the pieces in the basement of two different houses, because I couldn't bear to part with it.

We moved to our current house in 1992, partly so each of the boys could have their own bedroom. We needed additional furniture for those bedrooms, so I stripped the bedroom set of its olive paint, stained it a dark brown color, and gave it a coat of polyurethane. Son Tony used it until he left for college in 2003; Son Donald moved into the room until earlier this year when he moved into his own apartment.

The now semi-antique furniture has stood up well all these years. However, its current finish is looking a little worse for wear. The top of the dresser is quite scratched and there is normal wear and tear on the bodies of each piece. Today I attempted to disguise some of the damage by using the meat of a walnut and a permanent marker.

I can't remember where I heard about using nuts to hide scratches, but it really worked on the shallow imperfections. I was able to cover some of the larger ones with a well-smudged brown Sharpie, but when I was done there were still several shabby-looking places where the polyurethane is chipping off. The tops of the dressers ultimately need to be refinished, but the room will get very limited use in the foreseeable future, so I don't want to put a whole lot of effort into it.
Posted by Kathy G at 5:40:00 PM