After removing the Sticky Tack from some of our bedroom ceilings, it was time to paint. I HATE painting ceilings because:

My goal today was to paint the most stained ceiling. There was a partial gallon of ceiling paint from the last project that I thought would be enough, but I underestimated and it ran out when I was about two-thirds of the way through. Grumbling, I changed my clothes for a trip to the hardware store. As I surveyed the brands of paint available at my local big-box store, I saw something I've never seen before-color changing ceiling paint. It didn't cost any more than the regular white ceiling paint. I had to try it!

The paint label said..."Paints On Purple-Dries White. You Won't Miss A Spot!" 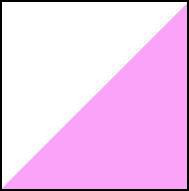 When I opened the gallon of paint, the light purple tinge was obvious. I poured some in my paint tray, grabbed the brush and roller, and started on the side that went paintless the first time. I have to admit the purple color made it easy to see if I was covering the ceiling well. It didn't take long for the purple hue to fade, though. By time I finished the first section of the room, the purple was much less obvious, but there was enough color left to allow me to see where I'd already painted. I went up and down the room rolling the paint evenly across the ceiling.

After I was finished, the first section of the ceiling was almost entirely white in color. An hour later, when I went in to do some cleanup, there was no remnants of purple left.
Posted by Kathy G at 5:50:00 PM