Today I, and a good chunk of America, sat down to watch Barack Obama take the Presidential oath of office and give his inaugural speech.

This is the first time I've been able to listen to an inauguration speech as it's given; every other time I've been working or otherwise unavailable. The speech was pretty good--a patriotic pep talk, asking people to "...pick ourselves up, dust ourselves off, and begin again the work of remaking America."

I turned on the TV about a half-hour before the swearing-in was scheduled to occur, so I got to hear the political analysts talking about dignitaries as they were seated on the platform. It was fun watching the masses of people that journeyed to Washington D.C. to see the whole thing live. They seemed to be enjoying themselves, even though it looked very cold.

After the inauguration ceremony was over, I turned the TV off. I had no desire to have an analyst tell me what I just heard! 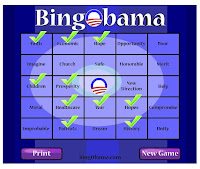 Because I comprehend better when I read things (as opposed to hearing them), later this afternoon I searched the Internet for a transcript of the acceptance speech. Not surprisingly, every news organization had a page devoted to it. Just for fun, as I read the speech, I kept track of the key words he used on a card from BingObama.

There's no doubt that Barack Obama gives a good speech. After a while you start to notice he uses a lot of the same words. To make things a bit more entertaining, use BingObama to generate a bingo card to use during the next Obama speech you are watching.

The directions were easy; I just had to check the words he said during the speech. The site could generate new cards with the click of a button, but one was enough for me!
Posted by Kathy G at 6:35:00 PM