When I got a food dehydrator for Christmas, one of the things I really wanted to make was jerky. Son Brian is a consummate jerky culinarian; he experiments with the type of meat and the marinades so it's different each time, but it's always good.

Tucked inside the dehydrator box, along with the instruction manual, were two packets of spice/curing mix, and instructions for using them with ground meat. Yesterday I bought a package of hamburger, and today I made my first beef jerky.

According to the instruction book:

"Jerky is a favorite snack for school, lunch, on the trail or just about anywhere! ...The finished product is a protein-rich exercise in chewing and ever so delicious!" It went on to say that "...ground meat jerky is easier to make, dries faster, and is less expensive and easier to chew than jerky slices."

The recipe for Easy Homemade Jerky called for a pound of ground meat, one packet of jerky spices (the spice and curing mix) and time. After mixing the meat and seasonings together, I used my cookie press to extrude the meat into strips onto several dehydrator trays, stacked them on top of each other, topped them with the lid that contains the heating element and the motor, and started the whole thing up. It only took about ten minutes before wonderful smells started emanating from the kitchen.

Per the instructions, I set the temperature to 155 degrees F; the directions indicated the drying time could range from 4 to 15 hours, depending on the thickness of the meat, the amount of meat on the trays, and the humidity. I started mine about 8:15 and it was done at 12:30, when the pieces looked like very well-done hamburger: 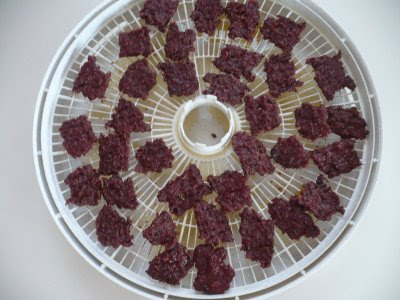 At the end of the drying time, the instructions said to wrap the jerky in paper towels and let it stand for a couple of hours so the excess grease would be absorbed; that extends the shelf life. I couldn't let it sit on the counter, because I knew the cats would get into it, so I put it in the switched-off microwave while I left to run some errands.

The recipe indicated that one pound of meat would yield about 1/3 pound of jerky. Storing the completed jerky shouldn't be a problem, although anything that is stored un-refrigerated will start to go rancid at room temperature after 3 or 4 weeks; I don't think mine will last anywhere that long!
Posted by Kathy G at 2:30:00 PM