Many Christmases ago, my boys got a package of glow-in-the-dark stars for a present. They were so excited to stick them to their bedroom ceilings! After consulting the dictionary, and deciding which constellations to use, they installed the stars using Sticky Tack.

Fast forward a couple of years. The Sticky Tack starts losing its "stickyness" and the stars start falling from the ceiling. However, a permanent reminder of the project remains; remnants of the orange Sticky Tack, along with an oily stain on the ceiling. However, by this time the boys were teens. They didn't mind the overhead mess, and didn't want me in their rooms cleaning things. It was easy to ignore the whole thing.

The boys are long gone from home. With all my newfound free time, I decided it was time for me to tackle the ceiling job. I had Tony carry the ladder up to the second floor, grabbed my equipment, and cleaned the Sticky Tack from the bedroom ceilings.

Before I got started I surveyed the project. There were several groups of orange dots; I assume at one time they were all discernible constellations, but I didn't recognize most of them. However, here's the Little Dipper depicted in Sticky Tack: 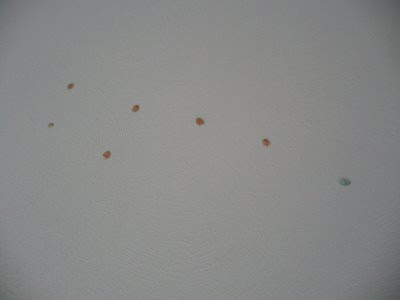 My goal was not to go for perfection with the removal, but to get the ceilings ready for a new coat of paint. I figured if I could get most of the solids off the ceiling, and repaint them with quality paint, any residue would be unnoticeable. I scraped off as much of the Sticky Tack as I could, using a blunt knife. The ceilings have a bit of a texture, which made the job harder; I tried to remove as little sand as possible, because I didn't want to have to redo that, too.

Once I had most of the solids off, I used lighter fluid to remove the residue. When the job was done, there were no orange gobs on the ceiling; they had been replaced by larger orange smears. However I hope a little TSP, a little Kilz, and a new coat of paint will take care of the remnants.
Posted by Kathy G at 5:10:00 PM