Back in the day I participated in pub crawls (organized events that visit multiple bars in one night). My pub crawling days are over, but this morning Hubby Tony and I participated in a coffee crawl, which is something more our speed. 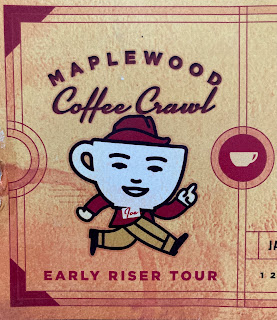 Just like the alcoholic events it was modeled on, this crawl was a nice way to meet like-minded people. There were two sessions. We chose the early one because Tony had a commitment later in the morning. The ticket price included a mug and samples from nine different places. (Eight of them were coffee; one was a coffee-infused candy.)

At some locations an associate served the coffee. At others it was self-serve. At those I made sure to only fill my cup up halfway. However, by the end of the event I think I consumed triple the amount of caffeine that I usually do. Instead of crawling I was buzzing along!