When Hubby Tony and I were planning our mini vacation we arranged a cat sitter for five nights. We researched what there was to do in Eureka Springs and decided that three nights would give us time to take it all in. That meant we had two more nights to fill. We thought that maybe we would head to Branson. A couple of days before we left I ran into our downstairs neighbor and told her about our plans. She told me that based on her experience a couple of years ago Bentonville (Arkansas) would be a nice complement to our trip.

The only thing I knew about Bentonville was that it was the birthplace of Walmart. I learned that Alice Walton (the daughter of Sam Walton) had built a fabulous art museum, there were a lot of trails and public art, and the downtown area had great architecture. I came home and did an internet search, which confirmed everything my neighbor told me. I also found out that the city is a hub for bicycling, and calls itself the "mountain biking capital of the world".

On Tuesday morning Tony and I said goodbye to Eureka Springs. Driving directly from there to Bentonville would have taken a little less than an hour, but we took a less-direct route. We stopped to see Beaver Lake, formed by a Corp of Engineers-built dam across the White River. At the last minute we had decided to bring our bikes, so we used them to ride through Pea Ridge National Military Park, a Civil War battlefield. We stopped for lunch.  A little after 12:30 pm we were unlocking the door of our Airbnb apartment just off the downtown square.

We spent the afternoon wandering around downtown. I'm not the world's biggest Walmart fan, but the museum was interesting. The self-guided tour emptied out into a old-fashioned soda fountain. It was closed because of Covid, but the outside ordering windows were open for service and we got a snack.

At dinnertime we drove several blocks to a restaurant that served large handheld crepes. The downtown street grid system was logical but a little confusing. North-South streets had letter names (A, B, C, etc), but depending on where the street was in relation to the town square you could have A Street NW, SW, NE, or SE. The same thing happened with the East-West streets, which had number names (2nd, 34d, 4th, etc). But streets seemed to dead end for no noticable reason and pick up again a few blocks later. I was glad to rely on my phone's map app.

The next morning we got out the bikes and took advantage of part of the Razorback Regional Greenway, which stretches for 38 miles. We were having a great time until somehow Tony's chain came off and got wedged behind the gear housing.  There was a bike shop nearby, but they couldn't immediately fix the problem, so I rode to get the car and retrieved Tony and his bike.

In the afternoon we drove to the Crystal Bridges Museum of American Art, where we took in some of the galleries and walked around some of the outside trails. There's a Frank Lloyd house on site (moved from New Jersey) and we took a self-guided tour. 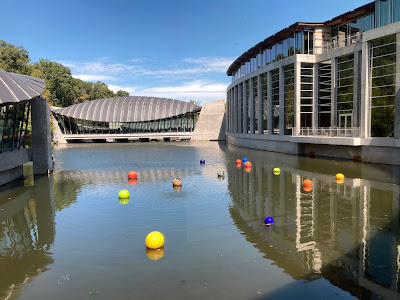 All good things have to come to an end, so after our second night in Bentonville we packed up the car and drove home. We got in mid-afternoon. Jackson the cat greeted us, then told us it was time for his lunch.