A-Hunting We Will Go

Several weeks ago Hubby Tony heard about a new book titled STL Scavenger: The Ultimate Search for St. Louis's Hidden Treasures.  The book lists things to find in 17 different neighborhoods in the metropolitan area (most in Missouri, but a few across the river in Illinois). We bought a copy, and have been having fun with it. 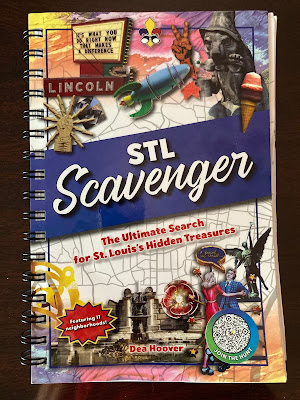 Today we went to University City, where there were 24 items to find. Each item has a four-line riddle and a photo or graphic, usually a very small detail you would often overlook. The clues range from so easy that even a non-St. Louisian could figure them out. For example:

On this street's walk of fame find this statue
Of the guy who said "Maybellene! Be true!"
He's busting his signature move
Encouraging fans to find their groove.

Others were more obscure and harder to find. After two hours and multiple trips up and down the Delmar Loop area we had figured out all but four, and we knew from clues that at least one of them was in a different part of the city.  We got lucky once or twice, looking up at just the right time to spot some brick or stonework on the second floor of a building. Some of our first assumptions turned out to be wrong, but fixable. Eventually we were hot and tired, and agreed to leave the unfound items for another day.
On the book's website there's a place where you can submit your answers for a chance to win prizes later in the year. Depending on how many of the chapters of the book we get to we'll do that. Or maybe we'll just do it for fun and personal satisfaction.
Posted by Kathy G at 4:08:00 PM