Just A Reason To Hit The Road

Last Saturday Hubby Tony replaced his old car with this (new to him) model:

Back at home from the dealer, he tried to contact the insurance company to get his new wheels put on the policy. There was no one there, and the message said he would have to call back during regular office hours. The company website was no help either, so poor Tony was forced to keep his new wheels in the garage until Monday morning. Then the work week started, and thanks to Zoom meetings Tony rarely goes anywhere. The car sat.

Yesterday the weather was more like mid-September than mid-August. Tony decided to start work early, which ended his day early. At lunchtime he asked me if I was interested in going on a jaunt with him later. I'm sure he knew what my answer would be. After all of his work things were packed up for the day we hit the road.

Tony had a route mapped out that would give him lots of highway driving and some exploits. We headed north, then east, crossed the Mississippi River at Alton, then headed farther north. Once you get out of Alton, the Great River Road has the Mississippi River on one side and tall limestone bluffs on the other. It was nice enough that we could roll down the windows and open up the sunroof. There was little traffic on a mid-week afternoon, and we soon made it to our first destination, Elsah, Illinois. 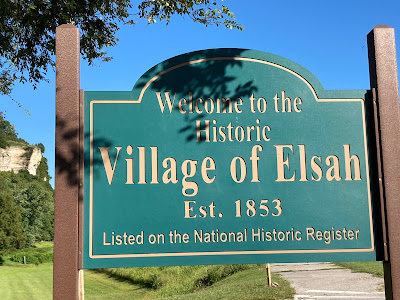 We've driven past the turn off to Elsah many times, but before yesterday never took the time to stop. I was glad we finally did. Tony parked, and then we walked over a block to the General Store, which was filled with a wide selection of gift items, edibles, and everyday grocery items. There, a friendly associate asked what brought us to Elsah and told us a little bit about the area.

I found out that the entire village is on the National Register of Historic Places. It was founded by James Semple in 1853, who offered free lots to anyone who built houses with stone from his quarry. The associate mentioned that we should check out the two-story school building (which is now the Civic Center), the Methodist Church (a Gothic-designed building built in 1874), and the Ice House ruins. Before we left we bought a pecan pie bar to split later.

As we wandered around the three-block long commercial district we saw all of the highlighted buildings, and when we extended our walk to the residential blocks there were many more stone buildings to be seen. We stopped and watched the multitude of butterflies enjoying the late-summer flowers in a large cottage garden. A cat sauntered across a quiet street, and a little later a small dog kept an eye on us as we walked past 'its' yard.

When we were finished exploring the village we returned to the car, where Tony offered me the opportunity to drive. Before returning to the River Road we went a couple of miles out of the way to see the campus of Principia College, a Christian Science-based liberal arts school. There were barriers at the front entrance, so we turned around.

Once back at the Great River Road we continued north to the city of Grafton, which is located near the confluence of the Illinois and Mississippi Rivers. There are shops, bars, and restaurants lining both sides of the road. Tony had picked out one that had a fun, divey atmosphere. We sat on the second floor outdoor porch that had a nice view of the river. After eating some tasty bar food we walked across the street, where we found a picnic table and ate the treat we had bought earlier, then strolled along the river. 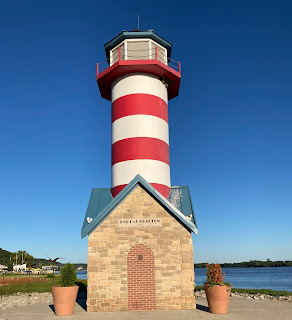 Tony's plan was to take the Grafton Ferry across the river and meander back home, but when we found out it was only operating on the weekends we just backtracked-once again with windows open, enjoying the beautiful weather. I drove and Tony worked on figuring out how all the knobs, dials, and touch controls worked.
Posted by Kathy G at 8:15:00 PM